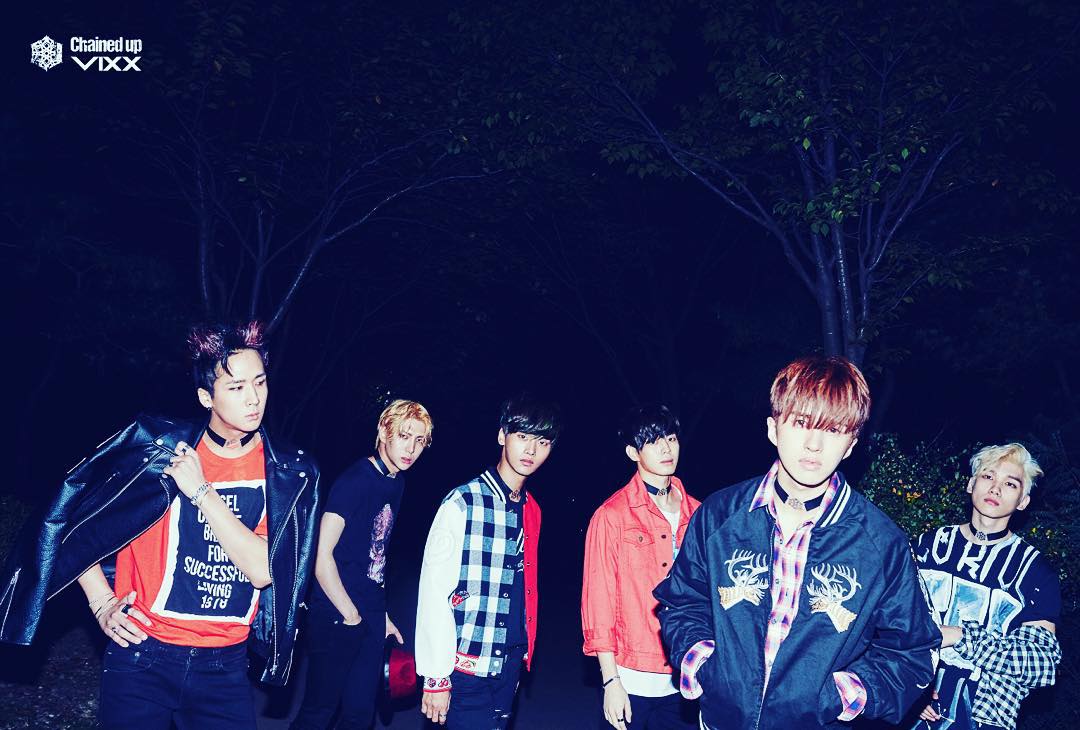 I got VIXX’s comeback as my birthday gift! [yes, my birthday was in November 10th, same day as Leo’s] [fate]

Ok, I’m just kidding, but they are back!! They already had MVs with a dark theme, with voodoos, human robots, and also happy and catchy songs. And now they’re back with a more serious MV… and very sexy.

I’ll try to control my feelings.

The MV starts with them at the top of a building, and we can see only the back of a girl walking around.

Now the MV actually starts. Each one of them are alone in different places, using chockers.

Ravi is in that light square filed with cloth; Hyuk’s in front of that stair that goes to nowhere; Leo’s surrounded with golden chains; Ken’s in that glass cage filed with flowers; N’s in a place with broken mirrors on the ground and Hongbin looks like to be in a room submerged

Actually, the MV per si doesn’t have a story [like we see in “Error”], but I understood that they are all chained up to the same lady that appears sometimes, walking through the building or in the woods outside. And they try to get away from where they’re lockded, but they can’t find an exit.

All of this is showed between dancing scenes, and this is one of the best parts in VIXX’s videos. They’re known for their synchronized dances, and it wasn’t different in “Chained Up”. I just missed more of the dance in the MV, so I’ll just wait for a dance version.

Let’s take a little break here: the choreography was created by the talented and beautiful Ian Eastwood, who also created Taemin’s “Danger” dance in his solo debut, and also SHINee’s “View”! [let’s all thanks him ok?] [And I totally recommend you all to watch his videos on his YouTube channel. He’s amazing, super talented and his girlfriend also dances with him!] [relationship goals]

And this was, by far, VIXX’s sexiest dance ever. Ok we had the body waves in “Eternity”, but nothing can compare to “Chained Up” chorus.

Just a comment: Hongbin is my bias, but since VIXX LR’s debut I can’t take my eyes off of Leo. And then, in this MV he was so sexy and so perfect he got me like:

Back to the MV: they can get away from their “cages” and they got kind of lost in the woods. When we think that everything’s well, the lady reappears holding their chockers. At the very beginning of the MV, at 16 seconds, we see her eye, followed by VIXX’s eyes, one after another. This same scene replays, but at the end we see their chocker’s symbol in the last eye.

So, they’re chained up to her again. And when we read the lyrics, that’s exactly what happens:

No matter what I do I won’t be able to escape you.
In the past I thought there was no power relation in love,
but now I am trapped for life

The song is about a possessive love, but he can’t resist to her. Like he’s an animal who was trained by her, he can’t turn away. He freezes and got chained up.

Without moving a single muscle, I’m chained up, chained up

In my opinion, this is one of the best VIXX’s MVs and the whole album is perfect.

And VIXX is also promoting “Hot Enough”. I won’t make any comments about this stage, ‘cause my brain just melted after watching it al least 10 times.

I’ll also lave here two “Chained Up” stages, with them in black and white outfits [I can’t decide which one I like the most]

And another great thing that happened: they got their 1st win at The Show yesterday <3

I reeeeeally love VIXX, they trully deserves all the love in the world!

I already talked so much, so if you’ve read it all, thank you so much <3 I’ll see you next time!