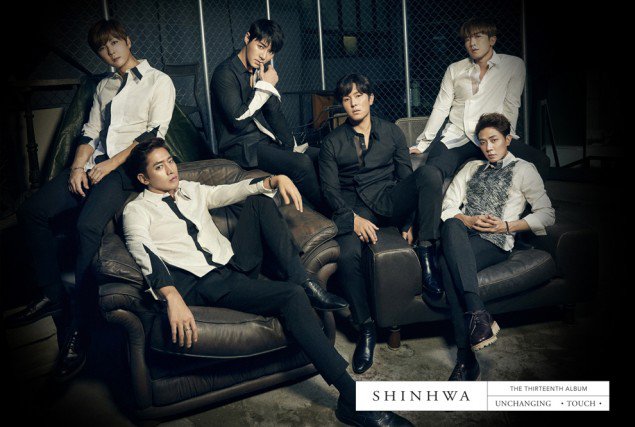 Hello everyone! How are you? After a veeeery lazy week I’m back on MLD, and the 1st review of 2017 couldn’t be more special than this one! The emperors Shinhwa made they comeback with their 13st album called “Unchanging”.

The MV “Touch” was released on Friday but I only watched it yesterday. It doesn’t have a story or scenes that explains what’s happening. It’s basically them in different places, suffering theirs souls out after the end of a relationship.

For their acting I really thought that the guilty was the woman, for ending their relation and breaking their hearts. BUT when I read the lyrics I’ve realized that it’s completely the opposite.

He [speaking about all of them] realizes how selfish he was and asks / begs for her not to come back, not to stay with someone so bad as himself. I got so sad reading this.

“Yes it’s all meaningless, I still have nothing to say

I only realised it after you left, what an ass I was

Yes I have no right to beg and cling on to you at all, I don’t

Just don’t come back to me

I’ve only hurt you, I’m just a fool

Just don’t come back to me, don’t even look back”

And what can I tell about Shinhwa? They’re about to complety 19 years as a group, the longest group still active and together with the original formation, and they still dance a lot! – although I think that the dancing scenes on “Touch” were too fast. Being really honest my favorite [MV and dance] is still “Sniper”, released on February 2015. But it was worth waiting for their comeback, because they never disappoint me! [off: can you believe that they all are almost 40 years old?!]

I still didn’t listen to the second part of “unchanging”. Yes, second part! Shinhwa released the 1st one on November, with the title song “Orange”. The songs are more romantics and gives you a Christmas feeling? [I don’t know how to explain, but I felt this way].

But I’m sure that when I listen to the second part I’ll flood my twitter about it, since Shinhwa is one of my favorite groups ever! So if you want to follow me there, be welcome! [I tweet almost everything in Portuguese, but sometimes only in English too hehe]

I hope you all enjoyed this review! And tell me what were your thoughts on Shinhwa’s comeback <3