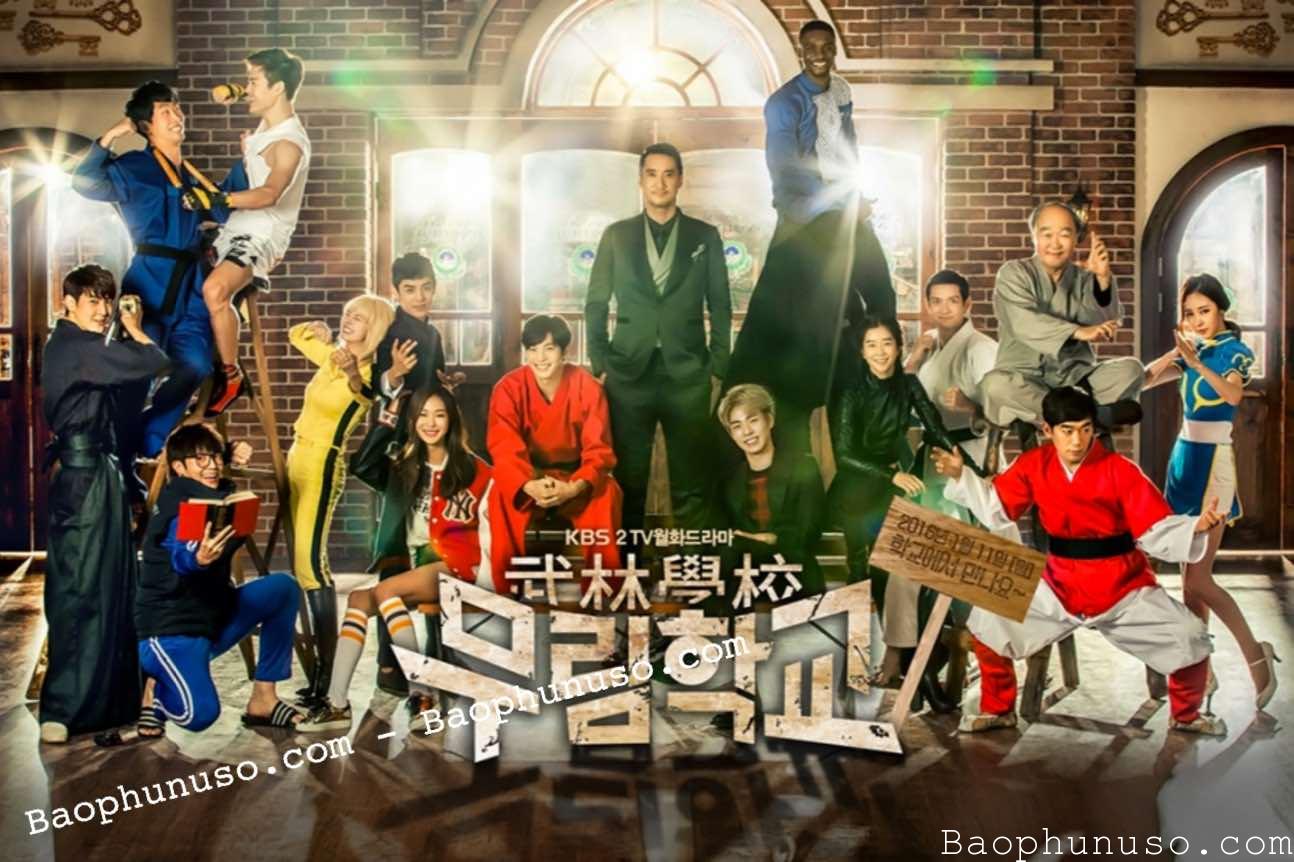 I’m finally back with a drama review <3

And this time I came with a very recent one! Aired from January 8 to March 11, Moorim School was one of the most interesting dramas I’ve ever watched.

It’s really hard to explain the plot, because just like it happened in “The Heirs”, all the characters of Moorim are connected.

Yoon Shi Woo (Lee Hyun Woo) is an idol of the famous group Mobius. An arrogant singer that hides a very serious health problem: he’s losing his hearing, and the doctors can’t find a solution for it. After an accident during a performance, a fan advices him to look for Moorim School’s headmaster, ‘cause he’ll be able to help.

At the same time, we get to know another lead character. Wang Chi Ang (VIXX’s Hong Bin) is the illegitimate son of the Chinese Wang Hao (Lee Beom Soo) – President of the largest Chinese enterprise, Shanghai Group -, with the Korean Kang Baek Ji (Hwang In Young). He’s spoilt, arrogant and hides his weaknesses behind his jokes. Chi Ang and Shi Woo hate each other at first sight!

After being a victim of a scandal, Shi Woo decides to search Moorim School, since his ear pains became constants and more intense. Chi Ang, on the other side, is send to the institute by his father – with the condition that his mother can live in China after he graduates [she lives locked at home, sonce she was Wang Hao’s lover. Just like Kim Tan’s mother in The Heirs]. On the way to Moorim School, Chi Ang almost drowns and is saved by Sim Soon Duk (Seo Ye Ji), whom he begins to call Ariel.

Soon Duk has a very important part in the scandal that Shi Woo was involved, but I can’t tell about it. What matter is: the three characters met on the way to Moorim School. She’s actually a student, and Chi Ang decides tostudy there to be close to his Ariel (he fell in love at first sight, and is actually funny because she doesn’t care at all).

Chi Ang and Shi Woo start to fight – I can’t tell why – and the Moorim School’s protection seal is broken.

What do you mean “protection seal”?

I’ll explain dear reader. Remember when I told that this is one of the most interesting dramas I’ve ever watched? It’s because it involves a certain dose of magic. Moorim is an institute hidden in the woods, and only indicated or chosen people can enter this college. The headmaster, , Hwan Moo Song (Shin Hyun Joon) made this invisible barrier around Moorim, so a “commom” person can’t find it.

The fact that two young boys broke this seal means that they’re not as commom as they thought. And remember about that fan that talked with Shi Woo about Moorim? She’s Hwang Sun Ah (Jung Eugene), a student of the institute (and by her surname, you all know that she’s the headmaster’s daughter).

On Moorim, the grades are not what matters the most, but the personal progress of each student. Honestly, loyalty, team work, and other virtues is what the students learn every day – I must say that not all of them agrees with this way of learning, without competition, and it causes other conflicts. Besides all this, Moorim is known for its martial arts classes, and is responsible by the formation of well succeeded people, such as athletes and managers. But there’s nothing about Moorim on their school history – the institute’s identity is highly secret.

All of this protection exists because there’s a legend that says that inside Moorim School is hidden a key’s piece of a great power, the Chintamani. The person who possess it will be able to control the world. So, of course there are people with evil ambitions going after this key’s piece. And this same legend was the cause of a big accident occurred years ago – and that’s still responsible for several present traumas (affecting several characters). [I really can’t say anything else]

Now let’s talk a little bit about the cast. One of the reasons that made me love Moorim school were the foreign actor; among them, faces well known of K-pop fans: Alexander [former member of U-kiss], on the role of the ambicious [and unbearable] Yeob Jung, and the solo singer Shannon Williams, the cute Shannon. Other foreigners are: Daniel Lindemann (professor Daniel) [Germain], Samuel Okyere (security officer Sam) [Ghana], POP (student Nadet) [Thailand].

The female characters deserve a very special attention in this review, because they were all so different from all the other drama’s. Beyond being physically and psychology strong, none of them were full of nuisance and doubts (like we’re used to see on school k-dramas). I really loved it, specially Soon Duk, that didn’t keep quiet when she was bothered. I get frustrated when the female lead doesn’t act, accepts everyhing with her mouth shut, and keeps doing a lot a drama. So I expect to see more Soon Duks on K-dramas, amen.

I loved the development of all the lead characters. Aside from being used to the old cliché “bad guy becoming a cool person”, in Moorim School even that was a little different. Shi Woo and Chi Ang had a lot of external influences to mature in a very foreign place like Moorim. But the inside was very important too. To Shi Woo, he needed to found out who he actually was, overcome past traumas and his hearing problem. And he could see faster which way was the right to go.

But Chi Ang had to overcome not only his own pride, but also the threats of his father. He was my favorite character, even though I got really angry with him sometimes. Wang Chi Ang didn’t change suddenly; he made mistakes, had trust issues, was afraid for his mother’s future, even his father’s future. He really made a lot of wrong things, to finally understand what were important for him. And this is what made me like him the most.

[Excuse me for a fangirl comment: this was Hong Bin’s first drama acting, and I loved so much! Specially when I wanted to punch Chi Ang’s face I though: “wow he’s really acting so well”. It made me proud <3]

And since I’m already talking about Chi Ang, I have to talk about his bromance with Shi Woo. They both started arguing all the like just like two kids, mas they naturally became closer [I can’t tell why], leaving their differences behind [just a little bit, they fought a lot]. Hong Bin and Hyun Woo had a great chemistry, so they definitely made a cute bromance. It’s on my Top 3 for sure <3

BUT there were two things that bothered me on Moorim School:

Remember about the foreign characters? There were many dialogues in two idioms. Let me explain with an example: Yeob Jung said huge phrases in English, and Sun Ah replied him in Korean. It was so annoying [but it was kind of funny at the same time], and there were some plot mistakes about those scenes. But nothing really bad, only details. The only character that nobody understood was Nadet [poor guy].

It might sound ridiculous, but Soon Duk’s hair bothered me so much. I can count the scenes where she wasn’t with those braids. Seeing the same hair style for 16 episodes got me so tired, but I understand that even this reflected on her personality. She had to work a lot to help her blind father, and had to be a good student as way. She really didn’t have time to worry with futile things like her hair <3

And last but not least: Shinhwa’s Kim Dong Wan as the Taekwondo teacher Kang Tae Oh. He was very important for a certain character, and I loved to see him acting. [I had to talk about my bias]

The OST was really good too, including two VIXX songs and a solo of Ken. You can download it here.

I loved Moorim School, every single second of it. Even if there weren’t 20 episodes [as expected], the plot wasn’t affected thought the 16 episodes. It was all full of mystery, secrets, overturns, and there were several times when I thought that everything would eng in a very bad way.

I still miss Moorim School, and it has ended a month ago </3 You can watch it on Viki or on Drama Fever <3

If you got curious about it, watch the trailers:

Thanks for reading it all! See you next time!

P.S.: I had a very special “thank you” to write. After every episode of Moorim School, I talked a lot with Kwon-oppa. He’s a very dedicated blogger, and he writes K-dramas recaps of every single episode he watches. His website is Dramajjang, and I recommend you to follow him! But beware: he really recaps everything about the episode, so there are spoilers if you didn’t watch all the drama.

Kwon-oppa, thank you so much for letting me spazz your twitter DMs hahahaha I had a very nice time talking about Moorim School with you <3